The Prototype Speed Boats Of The Future

Boats are one of the oldest forms of transport in the world, and over the centuries they’ve been improved and refined to the streamline vehicles that roam the waters today. There is a huge array of different types of boats available in the world, ranging from small row-boats to massive freight haulers, and, of course, the speed boats that have been breaking records for the last few decades.

But a new era of boat is making the rounds, and they’re being designed to make use of modern engines and computer systems that not only provide entertainment, but can connect to the internet, allowing full online usage for email, Geelong cup betting, and much more. The idea is to create a set of automated systems that are used to utilise aerodynamic technology to maximise airflow and increase overall stability and speed. To that end, the latest prototype to hit the scene is from Advanced Aerodynamic Vessels, a company that specializes in creating ultra-fast boats using the latest airflow sciences: the potentially world-changing A2V.

The first designs for the prototype came out in 2015, and Advanced Aerodynamic Vessels recently began to sell their first passenger version. The vessel was designed and built in secrecy, with extremely little ever being leaked to the public.

The boat is composed of an advanced composite-hull, which is 10.5m long, with a beam of 7.4m. Displacement for the vessel is around 3 tons light, and 4.5 tons fully loaded. It’s equipped with 200 HP Mercury Verado motors, and has enough space for six passengers. The boat is designed to exceed speeds of 40 knots, which is about the same speed as most faster ferries, which are considered commercially unviable. 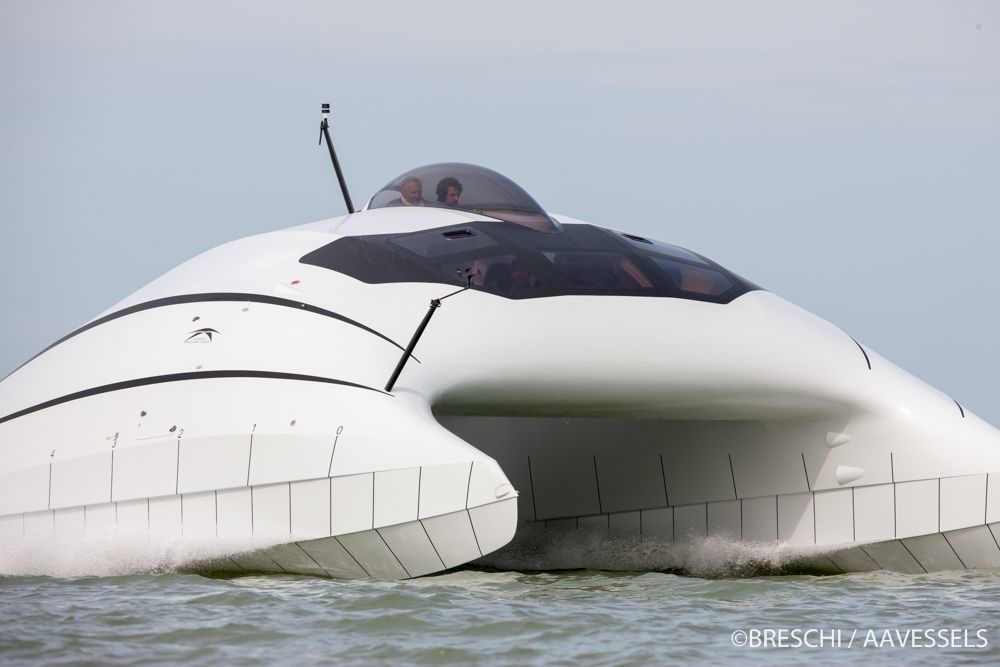 What sets the prototype apart from other seafaring vessels is the way it interacts both with air and water. As it travels, it generates a certain amount of lift, not too different from a hovercraft. The higher lift means less water friction, allowing it to glide over the water at blinding speeds. Not only that, but the two sides that do interact with the water are designed to slice through it, creating an effect of skimming that both provides high speeds but extremely low fuel consumption.

Plans For The Future

The prototype may just give rise to something much faster, however. A2V predicts that a 25m long version of the boat may hit speeds of 60 knots. The idea is to make a vehicle that attains better fuel consumption the faster it travels.

While it hasn’t been released to a wide market, the A2V design could have a number of practical applications. Providing fast and reliable transport to offshore platforms, governmental use for rapid interception, and, of course, use as a speed vessel, possibly in competitions.

There are few other boats in the world that can quite reach the same speeds as the A2V, and it may just change the nature of speed boating forever.