The Strangest Bikes Of All Time

The Strangest Bikes Of All Time

Today’s modern motorbike is a simple and efficient machine that has stood the test of time to become one of the world’s most popular forms of transport. A single engine attached to two wheels that allows either on or two riders has proven to be a design that has remained almost unchanged for the last 100 years. But like all things, bikes have not been strangers to weird and wonderful changes throughout the years, with some engineers and mechanics creating two-wheeled machines that were so different to the standard that they were almost lost to the ages.

This strange machine had a bucket set and come with an extremely low centre of gravity paired with a hub centre steering setup that was built between 1921 and 1926. Sold with a 283cc two-stroke engine in the United States, and a 347cc engine in the UK, it had a five-speed friction drive in the rear wheel, and was later released with a three speed transmission that worked with a chain drive system. While the Ner-a-Car was not too different from most bikes in terms of mechanics, it’s elongated chassis and bucket seat made it popular among collectors, and it gained a reputation as one of the most reliable machines of its time. 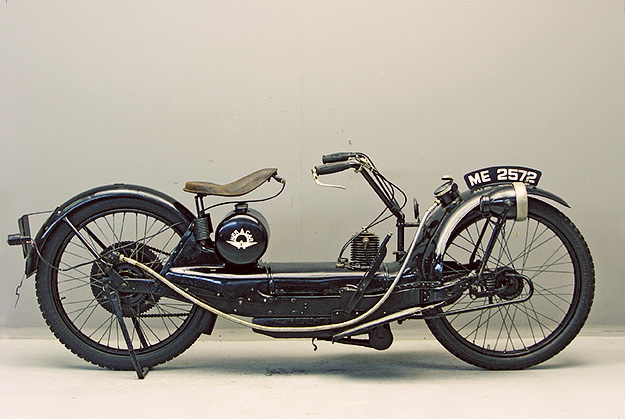 The Imme was a monument to the efficiency and engineering prowess of the Germans, and was built between 1948 and 1951. It had features such as a single sided front fork and rear swing arm, along with cantilevered suspension in the rear, features that would not become standard in most bikes until many years later, meaning that the Imme was many years ahead of its time. Earlier models were powered with a small 98cc two stroke engine, while later models were fitted with a 148cc motor that provided much more going power.

Welded tube chassis and motors had been the norm for the manufacturing process during the earlier years of motorcycle design, but these methods proved expensive and labour-intensive. Then came the Ascot-Pullen, a bike that made use of a pressed steel monocoque chassis that became more popular as factories sought ways to improve and streamline the way in which bikes were built and assembled. The Ascot-Pullen was built between 1928 and 1930, and featured a powerful 498cc four stroke single cylinder engine that would go on to be used in many other designs, ensuring the user would get home quickly with plenty of time to enjoy casino games at https://pokiesonlinenz.net.nz/review/spin-casino/.

Having a motorcycle that had both front and rear-wheeled power was a popular thought by many engineers over the years, but it was never truly seen in full production until the development of the Rokon. Created by Charles Fehn in 1958, the Rokon was sold to Nethercult Industries after which it was developed in the United States from the 1960s onward. From 1973, the Rokon had an automatic transmission, and became the only production bike in history that had the innate ability to float on water without aid.