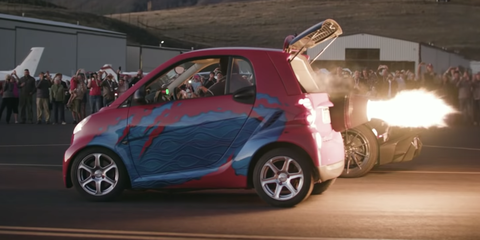 The vast majority of cars in the world are generally powered by some kind of motor that directs the power to the wheels on the vehicle. It’s an efficient design that works for just about any type of car, and has allowed engineers to build unique vehicles that can reach incredible speeds.

But there are also limits to this kind of design, and there are few ways of making a car faster short of adding a jet engine to it, which is a lot more common than most would believe. With that in mind, these are some of the fastest cars in the world with jet engines.

Rover, once one of the world’s most prominent automotive manufacturers, had been finding different ways to add turbine technology to cars during the 1950s. It would be more than ten years before they could actually test such a vehicle out on the course, which they did in the Le Mans.

Due to the fact that it was experimental, it was allowed to take part in the event, eventually coming in at 8th place. While this might not seem that impressive, it proved that jet-engined cars were feasible enough to work in professional racing events.

Something of a legend among racing fans, the Green Mamba earned a name for itself due in part to its unique design, but also because of the fact that it had a huge jet turbine engine built right into it. It was created in 1968, and had the engine that was taken from an unused jet fighter.

Created by Doug Rose, the Green Mamba became a popular touring piece, and Rose would take it across the United States for a number of decades. It was stolen in 2006, and Rose would go on to build another, but he would unfortunately Rose would die while performing an exhibition lap on the Norway Speedway.

In fact, the Bloodhound is able to reach maximum speeds of around 1287 kilometres an hour, which is faster than a lot of planes fly at. The team behind the Bloodhound has set a number of records over the years, but they’re hoping that the Bloodhound or a later iteration will hit speeds that will likely never be beaten.

Very similar to the Thunderbird, the Chrysler Turbine Car was the first of its kind, and integrated jet engine technology at a time when few other car manufacturers even had the idea. It didn’t produce a huge amount of horse power – around 130 in total – but it did prove to the world that miniaturised jet engines could be placed inside a land vehicle.